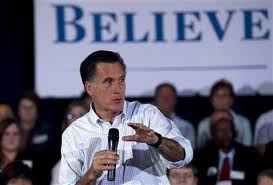 The very prospect of Mitt Romney assuming the helm of the largest, strongest economy in the solar system is already causing the sun to shine a little brighter!  New claims for unemployment benefits are in decline. Hiring appears to be on the rise. Consumers are feeling moderately more confident and hence, are spending more. And businesses, anticipating the demise of Obamacare, are beginning to feel a little more optimistic about their long term prospects and plans. Way to go Mitt!

Of course, Obamanites will protest: "Wait a minute, if you're going to blame Obama for the recession (which of course was ALL Dubya's fault) then you've got to give him credit for the run-around...er...I mean turn-around!"

WRONG-O DONKEY BREATH! We Americans are a resilient bunch. The recovery was inevitable from the day the Federal Government lost their grip and screwed the pooch in the first place. We ALWAYS pick ourselves up and move on. No thanks necessary to FDR, GW Bush, BH Obama, or anyone else. It's just a matter of how we do it and how long it takes. And for that, the Washington frat boys deserve far more of the blame!

"Okay!" they bray, "Then what the crap has Romney done to deserve any credit? He's just a candidate, and a lousy one, at that!"

Excellent question! To which I answer, 'Absolutely nothing...yet. Which is far more than Obama has done to help the situation.'

But here's the truth. Obama and Democrats, with a fair dose of help from big government Republicans have done just about everything wrong since Obama took office. Even before that, both the growth and explosion of the housing bubble which precipitated the recession, can be laid squarely at their feet. Dating back to Jimmy Carter and accelerated by William Jeff, the affordable housing initiatives forced lenders (Fannie Mae & Freddie Mac) to extend copious amounts of credit to people who clearly, were unqualified. Of course, the banks resisted at first, but with Uncle Sam holding out an open checkbook and promising to back the risky loans, they figured, "what the hell?" That's kinda like handing a shot of whiskey to an alcoholic and acting surprised when he drinks it! So the party was on.

Washington is notorious for making all the wrong decisions when it comes to "managing the economy" which they have no business doing in the first place. That's why the best results accrue when they DE-manage; like Reagan deregulation, de-taxation, and de-federalization (aka privitization) or Gingrich/GOP style welfare reform and budget reform.

The prospect of de-management or UN-federalizing the economy via the repeal of Obamacare, reduction of federal agencies and programs and constructive tax reform as is portended by the prospect of a conservative administration under President Romney, has markets hoping for better future outcomes and hence, beginning to move again. It is, indeed, the Romney Effect!
Posted by Unknown at 12:33 PM 2 comments:

A Shameless Plea for Followers

In this critical election year, there is an unprecedented need for libertarian citizen voices who can help UNITE Americans around the Constitutional principles that bind us, without falling into the vitriolic partisan bickering so prevalent in the media and the blogosphere, generally.

Read a few of my articles and if you agree that, whether or not you agree with my conclusions, the expressions are at least civil, rational, fair-minded, and engaging, please follow my blog and share both my commentary and your own thoughts about it with those in your online circles.

Your participation will encourage my commentary, which will in turn, hopefully, stimulate ever more constructive dialog and ultimately, influence. Let us reason together!

Bruce Ackerman
The Rational Conservative
Posted by Unknown at 12:15 PM No comments:

The Irony of Santorum's "Success"

Rick Santorum has enjoyed an almost incomprehensible wave of support in the GOP Primary over the last 2 or 3 months. But the bloom is clearly off the rose and Rick's popularity is going the way of so many of his predecessors in the on-again/off-again fight for front-runner status against the indomitable Mitt Romney.

In hindsight, the Santorum factor isn't as inexplicable as it first appears. Santorum's strength came not from his own conservative virtues, but from the "vices" of his competitor anti-Mitts. Rick Perry torched himself with poor debate performances and a serious illegal immigration faux pas. Herman Caine became embroiled in allegations of sexual scandal. Congresswoman Michelle Bachmann fell to ridicule from the left and a lack of personal gravitas, and late-comer Jon Huntsman never got off the ground. Ron Paul doesn't play ball in the Mitt/not-Mitt tournament and stands apart with a loyal, but too-small constituency to factor in the contest.

Newt Gingrich, alone, offered voters a quasi-viable not-Mitt alternative to Ricky. With the appeal of "big ideas" (code for big government solutions) and a big mouth for debate, Newt captured the imagination of the anti-Mitts and flared into front-runner status for a fleeting moment. But he soon withered under the heat of scrutiny when his big negatives were exposed as well. And yes, you can credit Romney for shining the light on the dark side of Gingrich's moon in a great practice expedition for the Obama contest.

So Santorum rose again; like a Phoenix out of the ashes of his self-destructed brethren (and sister). But it was only after all the other options burned out. Let's face it, where else were the anti-Mitts to go? Ricky has made the egocentric assumption that it was a warm pro-Santorum wind that blew him into contention, and not the chilly anti-establishment backdraft. But he is wrong! Santorum is now the victim of the very voters he courted so successfully. Having campaigned as the quintessential "Not Mitt" candidate, that's now ALL he has going for him, and the voters are beginning to see that it's a a few thousand straws short of a bale.

Former Senator Santorum is now sinking fast even in his home state of Pennsylvania where some polls have him trailing the Gov. Pundits are pushing him to get out, if only to save himself for a future Presidential bid. But I predict that in or out; win or lose in PA, Santorum is a sunken dinghy.  He's a candidate with limited appeal; mostly to those who care ONLY about social issues and the trappings of moral courage, but who lack the courage themselves to take a close look under the hood. Santorum is the real faux conservative in the race. Just look at his voting record.

In a future contest, if you stack Santorum up against likely GOP rivals like Marco Rubio, Governor Christy, or even Rand Paul, Santorum doesn't stand a chance. No, Santorum's days as a national candidate are numbered. And that's probably pretty rational, as well.
Posted by Unknown at 12:24 PM 3 comments: