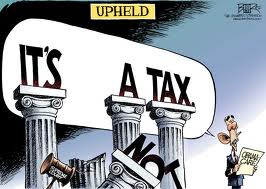 Since the Affordable Healthcare Act has been thrust front and center onto the public stage by Judge Roberts and the Supreme Court decision, I thought I'd take the opportunity to share my always-rational observations.

First, I have to chuckle at the name of this behemoth legislative juggernaut. Affordable for who, exactly? The Act, which Obama and his surrogates "sold" (or force-fed) to America with a $900 BILLION price tag is now projected to cost over $1.7 TRILLION over 10 years--more than 10% of today's "funded" national debt--for ONE program alone! We have no comprehension of that kind of a number. But it's really big! And who gets to pick up the tab? Everyone under the American sun, believe you, me!

Obamacare will be paid for on the back of no less than 21 new taxes--all of which ultimately come out of the pockets of the middle class--the very souls Mr. Obama swore to protect. Why do these costs come from the middle class primarily? Because we have the lion's share of the money. No matter how much you tax the rich, it won't cover the cost of this federal government. But the money has to come from somewhere.

If you tax corporations, they'll raise prices to consumers--the middle class--to protect their margins and their shareholders--or move elsewhere. (That's both good business and self-preservation. They have little choice.) If you try to suppress their market pricing, you'll reduce choice, value, quality, or supply--which of course, has its costs, as well--to us, the middle class consumers. If you tax the rich even more (they already pay MOST of the income taxes received by the Treasury) they'll invest less in business growth resulting in fewer jobs and less opportunity...for who? The middle class! You simply can't kill the goose and still expect to harvest the golden eggs. 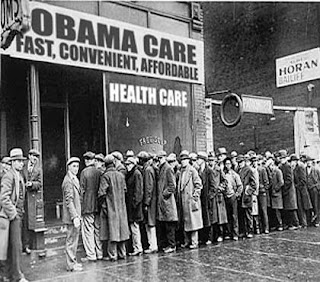 The alternative, if taxation isn't sufficient, is to borrow the money from the rising generation. In other words, go into debt. This is the hallmark of the Obama administration. Currently, the federal government borrows 40 cents of every dollar it spends plunging us deeper and deeper into debt every hour. Someone will eventually have to pay the bill. This will "tax" your children and their children after them, robbing them of the product of their toil and the rewards of their industry. Is that fair? Is it what you want for them? To say nothing of who we owe the money to. America is weaker, less independent, and less secure because of our debt to foreign powers.

But wait! There IS one way out...just print the money! Pay off the debt with worthless dollars! Sounds good, but it's the cruelest tax of all--inflation, the hidden tax--robbing the people of their buying power to pay the bills of an excessive and overreaching government; to pay for the illusory "FREE LUNCH." And, of course, those to whom we are indebted will resist this option with all the means at their disposal.

So you see, there are no winners in this game (except perhaps the ruling elite). We all lose together--the middle class most of all.

But there is yet another option. Scrap this 2700 page "comprehensive" Federal takeover that attempts to micro-manage virtually every aspect of healthcare, inserting the government between the provider and the patient; and replace it with a series of common sense, market reforms that address important issues like the role of insurance, portability of coverage, pre-existing conditions, cost, competition, liability and tort reform, availability and access. There are numerous solid and workable proposals on the table to address these issues and expand both access and quality of care for individuals while lowering costs, without a federal takeover of 1/6 of the nation's economy. That's the best, most efficient, effective, and Constitutional way to address the needs of the roughly 10% of Americans who lack access to affordable care. And that's rational!
Posted by Unknown at 10:15 PM