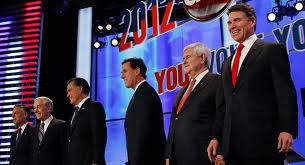 Tonight's Republican debate in New Hampshire was a yawner! But what do you expect with Democrat partisans Diane Sawyer and former Clinton Adviser and Strategist, George Stephanopoulos at the helm? Not that they were in particularly bad form but it was just a pewter debate with a dull finish.

That's good news for frontrunner, Mitt Romney, who emerged as the clear winner simply because no blows were laid on him that would knock him off his perch. As the pundits later pointed out, it's a little surprising that the rest of the field didn't try harder to take him down. But I wasn't so surprised.

They've got a dilemma: If they spend their air time throwing arrows at the front runner, they run the risk of coming across angry and petty--as dividers, not uniters. They also fail to deliver a distinctive positive message about themselves.


On the other hand, if they focus on the nuances of their policy differences in order to position themselves as the legitimate "anti-Romney," they leave Mitt untouched and quite possibly, the electorate unconvinced. That's what happened in the debate tonight. There were a few soft punches thrown at the "champ" but they were scarcer than he was prepared for. And none of them landed a significant blow. In fact, Mitt stayed largely above the fray and was able to focus on attacking Obama, rather than his Republican colleagues. That's rational!

You see, Mitt Romney and Ron Paul occupy unique positions in this race. Romney is the "establishment candidate" and front runner; considered the most moderate but also, the most electable and most likely to defeat Obama. He has a solid base of support that includes many Republican party insiders. He also has plenty of money and a well-organized ground game.

Paul is the REAL Anti-Romney; As unconventional as Romney is "conventional," but widely considered the LEAST electable in the field (although I'm not sure he should be--a topic for another blog). Paul's zealots are unlikely to defect until or unless the candidate does.

The rest of the field, Santorum, Gingrich, Perry, and Huntsman are all competing for the same "anti-establishment, Tea Party conservative but-not-so-far-gone as Ron Paul," anti-Romney vote. Trouble is, there are too many candidates splitting that constituency, which is why none can score a significant KO. Any ground they gain, is at the expense of one or more of the rest which leaves Romney and Paul unscathed.

After listening to the pundits tonight, the also-rans will probably revise their strategy and fire heavier artillery at Mitt in tomorrow's debate. But it may well backfire or at best, be a little too little, too late. At least for New Hampshire.