Biden vs. Ryan or He Who Laughs Last... 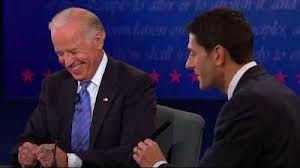 "When a wise man debates with a fool, the fool only rages and laughs, and there is no peace and quiet." ~Proverbs 29:9

It's fair to say that Joe Biden got the first laugh in his 90-minute confrontation with his would-be successor, Congressman Paul Ryan in last Wednesday;s debate. The Vice President managed to escape without any major gaffes besides his odd demeanor. The gas-bag-in-veep appeared as something of a cross between Alfred E. Neuman and Archie Bunker in what was possibly the most obnoxious display of condescension and pure rudeness ever witnessed in a Vice-Presidential debate. In fact, had it not been for his non-verbal antics, the Democrat might have scored a solid victory over his Republican rival.

That said, conservatives who expected Paul Ryan to walk all over the Prince of Gaffes were sorely disappointed. Biden's penchant for blowhardmanship against Ryan's reputation for policy acumen set some conservatives up for the fall. While Ryan comported himself well and displayed the kind of seriousness and command of the issues one would expect in a Vice President, he spent most of the evening on defense and was not overly forceful in either his criticisms of the current administration or in selling his alternatives.

In fairness, debate moderator and Obama BFF, Martha Raddatz helped stack the deck against the VP hopeful. She conveniently steered the conversation away from Obama/Biden's monstrous Achilles heel, THE ECONOMY in favor of the more tedious and less differentiating details of foreign affairs. This played to Biden's limited strengths, and narrowed Ryan's target. Raddatz provided additional cover for Biden by allowing his 82 interruptions in 90 minutes and by shifting topics whenever Ryan began to take off.

At the end of the day, this debate wasn't a game changer. But if I had to pick a winner, I'd give it to Biden by a sneer--at least on Wednesday night. Despite his obnoxious and condescending style, "Old Joe" did an effective job of shoring up his base. He polished up the old collectivist vision about as pretty as it gets and advocated passionately and almost convincingly for the campaign's meaningless slogan about "growing the economy from the middle out." Try explaining that one after a beer or two.

By brute force, Biden controlled the debate, frequently interrupting Congressman Ryan, and putting the Republicans' agenda on defense according to plan. He struck all the familiar chords; class warfare and the 47% and the assault on Romney's lack of specifics. Meanwhile, he offered NO PLAN OF HIS OWN to address the mounting debt, deficits, the approaching insolvency of social programs, or the sustained high unemployment that has left millions of Americans--particularly the minorities and young folks that put Obama in the White House--broken down on the shoulder of the nation's economic bridge to nowhere. Despite the size of the target, Ryan failed to strike a forceful blow. 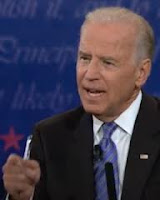 On foreign policy, Biden seemed vastly more in command of the issues as a matter of debate than his administration obviously is in command as a matter of practice. He spoke in familiar, if tedious detail about international policies and personalities, including his old pal "Bebe" (Benjamin Netanyahu, Israeli PM) and reassured the nation that, in effect, "despite what you see, we've got this! Don't sweat the small stuff!" While his confidence was strangely reassuring, his "facts" don't seem to be standing the test of post-debate scrutiny. So this may come back to bite him.

His greatest FAIL of the evening was his inability to explain the current scandal surrounding the assassination of Ambasador Stevens in Lybia. Although she opened the debate forcefully on this topic, Raddatz clipped Ryan's onslaught multiple times and let Biden off fairly easily on this devastating issue. Score: Biden--for now. But as the debate deconstruction has commenced in the media, Biden may not be laughing anymore. 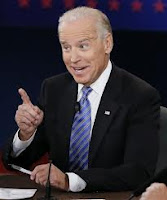 Still, Biden did effectively challenge the challenger saying "what would you do differently?" Other than a few uninspiring talking points about not slashing the military budget (most Americans think could stand some judicious cuts), supporting our more traditional allies, and bringing tougher sanctions against Iran, Ryan's rhetorical dip-stick came up pretty dry.

On the downside for VP Biden, his incongruous Cheshire grin, obnoxious laughter, and constant interruptions may have pumped up his deflated base but they're unlikely to win many converts from among undecideds. Joe's disingenuous "my friend" and genuine disrespect for his opponent made it clear that the senior statesman was not the grown-up in the room. In fact, if the winner were decided solely on "Who do you think is more equal to the dignity of the office?" Ryan takes it in a landslide! 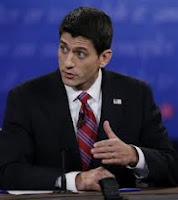 For his part, Paul Ryan showed Presidential gravitas. He was poised, dignified and articulate. The Congressman demonstrated that he had a strong grasp of issues facing the nation, both foreign and domestic. He effectively underscored the fact that this election represents a clear choice between top-down collectivism ("trickle-down government") under an increasingly oppressive federal bureaucracy, versus a return to more traditional American ideals of individual rights, responsibility, and opportunity under a smaller, less intrusive federal government. Ryan wasn't the forceful or feisty champion of these ideals that we had hoped for (I found myself wishing the Mittster were in the room to speak for himself), but you can chalk that up to youth and inexperience. Of the two, however, he was the guy most Americans would probably rather have sitting in the Oval Office chair should it unexpectedly be found even emptier than it is today.

Biden had a few laughs Wednesday night. But he may not want to take them to the bank. In a digital world of fact-checkers and Monday morning quarterbacks, the twinkle in Joes manic eyes could turn to tears on November 7th. We'll see who's laughing then!