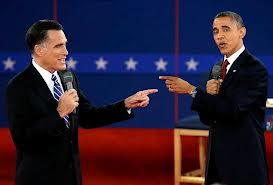 Obama was a transformed candidate in last night's 2nd of 3 presidential debates. The President came out swinging and with the aid of yet another liberal moderator, turned in an "aggressive" performance that at least tied the Governor's less dominant appearance, and may have even edged him out; at least in the eyes of pundits and committed voters. It may have been enough to stem the tide, but was it enough to turn it?

I don't think so. President Obama, like Joe Biden, shored up his demoralized base, but it's doubtful that he won over any independents or undecided voters. To the contrary, what remains of the "mass in the middle" are seeing a president who is inconsistent, often unpresidential, and offers no vision as to why one should expect the next four years to be any different--any better than the years just passed.

Governor Romney, on the other hand, again showed himself as a serious, competent, experienced executive with an actual plan to turn the tide of decline in the US. Independents looking for a viable alternative to the failed policies of BHO, saw that possibility in Mitt. His reassuring declaration that, "we don't have to settle for what we have today" will have resonated with these swing voters, while Obama's deflecting of economic challenges, excuse-making, and hollow assaults on Romney's plan and character will continue to be a turn off among the undecided.

Obama further damaged his own credibility--perhaps beyond repair--with respect to the Lybian crisis by suddenly claiming to have identified the attack on the US Consulate in Benghazi as "an act of terror" in a Rose Garden speech the day after a US Ambassador and three other Americans were killed in a likely Al Queada military assault. While the President took great delight in how the audacity of the shocking claim struck Governor Romney, and the support he gained from "neutral" moderator, Crowley, this could prove fatal to the President's re-election bid in the coming days. His Clintonesque parsing of his own speech to change its meaning, and his disingenuous offense at the "politicizing" of the Benghazi attack, while great political theatrics, itself, will not stand scrutiny.

So while liberal pundits and Obama supporters revel in the "points scored" by their guy, I would expect the quiet shift toward Romney to continue as the governor is seen as a bona fide US Presidential leader. Romney will likely add to his gains after this debate, mirroring the direction of change demonstrated in the Frank Luntz focus group in Las Vegas where former Obama supporters felt confident that Romney offered a better alternative for the future of America. That's rational. And that's a Romney WIN!

If you saw it differently, please comment and explain why.
Posted by Unknown at 5:36 AM