BruceNotes March 23rd - Did They Really Say That?!

I'd be rolling in the aisle with laughter if it weren't so totally pathetic. Both Rick Santorum and the messianic O-Brother have astounded even me in the last 24 hours with their two-faced rhetoric and blatant lies.

Let's take on the President first. I seriously almost fell off my chair yesterday when I heard him boasting about fast-tracking the Oklahoma-to-Texas leg of the Keystone Pipeline. Really! Finally, after 3 years of nothing but barriers to energy self-sufficiency Obama is going to "cut through the red tape, break through the bureaucratic hurdles, and make this project a priority, to go ahead and get it done." 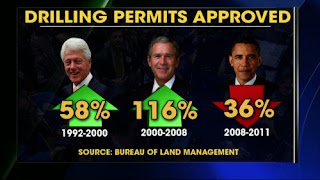 WHAAAAT?! The Big O apparently thinks the collective electorate has less between their ears than the quantity symbolized by the first letter of his last name. First: Where did all that red tape and those bureaucratic hurdles come from? Second: Didn't you just slam the door on this project a few weeks ago? Third: This leg of the pipeline doesn't require Executive approval and construction was already set to begin in June. The project was moving forward in spite of him--not because of him. This is a photo-op and propaganda piece--nothing more!


But here's where it gets really greasy: Brother Barack has been arguing for months, if not years, that increasing US production will have no effect on oil or gasoline prices. He argues (out of the other side of his mouth) that since we have only 2% of the world's supply (a blatant lie)   and consume 20% of production, we can never be "self-sufficient" so why try? Furthermore, his energy czar has actually voiced the administration's intention to raise the cost of carbon-based energy in order to create a market for so-called "green" or renewable energy alternatives.


He's also whining that those nasty Republicans were pushing him to make a decision on the pipeline too fast; that 3 years of review is not enough time for his legions of highly-paid czars and bureaucrats to figure out if it's safe. OK. Why the big show about backing this project now, all of a sudden? Why not take a few more years to mull it over--since it won't affect anything anyway. We're already exporting "surplus" oil!


Unfortunately for the Prez, prices are skyrocketing, and unlike his predecessor, the BIG O has done ZERO to stem the tide and now he's takin' it on the chin. Drilling permits are down on public lands, the moratorium devastated production in the Gulf, off-shore permits are down. Despite his sarcastic protestations to the contrary, BO has maintained an anti-fossil fuel energy policy and now, it's crushing him. So in perhaps the most transparently disingenuous flip-flop in history, the Bamster is suddenly trying to sell himself as the American oil Sheikh. What a joke! 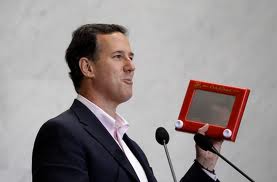 Sore Loser Santorum Turns on GOP
Now to our boy Ricky showing his true colors. Santorum suggested that if you're gonna vote for Mitt you might as well vote for Obama. Really Ricky?! After a Romney aide made a comment about "resetting" the campaign post-nomination, sorta like an Etch a Sketch, Santorum and Gingrich gave the liberal media grist for their anti-Romney mill by joining with  Democrats to make it mean Romney could not be counted on to govern as a conservative. Santorum: "If you're going to be a little different, we might as well stay with what we have instead of taking a risk with what may be the Etch-A-Sketch candidate of the future." Well ok, Mr. Conservative! You vote for Obama. Just like you supported Arlen Specter. Not very rational, but perhaps that WOULD be par for the course.