Fed Up With SanGingrich the Phoney Baloney Two-Headed Conservative

Call them Gingtorum if you prefer. Or Santorich; The so-called anti-Romney or "true conservative" candidate. Gingrich and Santorum, the Siamese-twin spoilers of the Republican race. This dubious duo is running a singular race on no greater substance than NOT being Romney. But of course, both were FOR Romney before they were against him (see 2008). In the process, they're trashing the Republican brand and making it infinitely more difficult to beat Obama this fall--a cause that should be as much of a slam dunk as Dorothy vs. the Wicked Witch.
Here's what bugs me about these guys. Santorum, to whom I have to give due credit for capturing the support he has despite his pathetic lack of organization, money, and charisma, somehow thinks that if Gingrich were just out of the race, he'd consolidate the conservative vote and sail to victory on a song.
Well, everyone is entitled to their fantasies. But as I pointed out in my recent blog article, Gingrich actually takes at least as much from Romney as he does from Ricky because, like Mitt, he tends to appeal to a more affluent, better educated, voter. Santorum's strength is with a blue collar, less educated, perhaps more religiously fervent follower. That's great in the deep south and rust belt states, but it's not likely to serve him well in the more metropolitan areas or in the general election. We'll see Mitt surge strongly in the winner-take-all Northeast in a couple of weeks.

Moreover, Santorum claims to be the only genuine conservative in the race. Well I suppose that depends on how you define the term. If it means you wear your religion on your shirt sleeve and champion family values, (most of which I happen to agree with, by the way), then, maybe so. But if it means you're NOT a Washington insider, that you aren't a big government spender, and that you don't believe the Federal Government should be in the business of subsidizing ANYONE, or of picking winners and losers, or of compromising on your core principles, well then, Rick "sometimes you've gotta go against your principles and take one for the team" Santorum is anything BUT!

Isn't it ironic that Santorum once called Romney a "true conservative," once supported the healthcare mandate, No Child Left Behind, Medicare Part D, and five debt ceiling increases?

Now to Newt. Granted, the guy is brilliant. But he also has an ego the size of a solar system. He really believes he's the ONLY one that can go head to head with Obama in a debate and win!? Imagine that! Ok, Obama's great with a teleprompter. But when he has to start defending his abysmal record as President--well, my 4 foot 11 inch Grandma Matthews could whip his as*. Without even showing up at the debate! 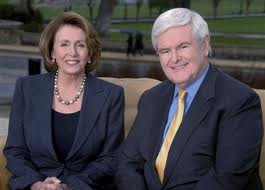 Newt does have some big ideas. And a few of them are even good ones. And give him credit--his performance in the mid-90s in reining in spending, reforming welfare, and the whole Contract with America thing, deserve the admiration and appreciation of Conservatives everywhere. But what's he done for us lately? He, too, supported the healthcare mandate. He shared the park bench with Nancy Pelosi on global warming and cap 'n trade, he LOVES Franklin Roosevelt, and thinks the Federal Government should do "BIG THINGS." He's a political opportunist who cashed in on the Fannie/Freddie mortgage debacle and who, more than anything else, wants to make his own giant mark on the history books he loves so much. See, with Newt, it's all about Newt. That's a giant red flag--it's dangerous in a President. So a "pure conservative" he's not. He IS, however a hothead reactionary who is only staying in the race today because of his personal animosity towards Romney--or because he thinks he can make history by pushing this nomination to Convention in August. Is that who we want for President?

Both of these guys constantly whine that Romney's no good because he can't garner more than 30 or 40% support. BUT THEY CONSISTENTLY GET EVEN LESS! How do you argue you're better than the competition that's cleaning your clock? Even when they win, for the most part, they squeak it out by a few points. The pundits keep saying, "Romney can't get over the top, he can't put it away, they keep coming back." Maybe so. Maybe people are still uncertain about Mitt. But en masse, they're even more uncertain about the anti-Mitts. If it were not so, Romney wouldn't be winning.

Finally, Mitt is constantly badgered by these guys because of the money he spends and the "unfair advantage" of his extensive organization. Don't we WANT a candidate who has the organizational skills and the financial support to actually mount a consistent and effective campaign--even a negative campaign against Obama? Santorum has only half-qualified in Illinois. Newt and Rick both failed to get on the ballot at all in Virginia! What's up widdat?

There's a reason. Neither of these guys have actually run ANYTHING in their lives. Do you seriously want their first executive chair to be sitting in the Oval Office? We've been there and done that. It's not working out so well. Mitt Romney is, if nothing else, a consummate executive and problem solver. It doesn't hurt that he's also a man of character and a principled conservative. That's what I want.

You do the math. San-tearup will have to win 69% of the remaining delegates to reach the coveted 1144 mark. Ging-grouch would have to get 78%.  Neither of them have a prayer of doing that (despite their respective claims to spiritual superiority). Let's stop wasting time and money on the twin towers of defeat, and get behind the one guy who can put Obama away and get this nation back on course; Mitt Romney. Now that's rational.
Posted by Unknown at 9:19 PM