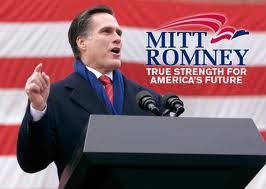 I've been supporting Mitt Romney unabashedly for a couple of months now. Today, I'm giving him my formal endorsement (like he cares!).

Earlier in the contest I gave my support to the most ideologically pure candidate in the race, Ron Paul. Ok, I supported Newt for a little while, too, but forget that! Today, I'm formally switching my allegiance to Mitt Romney and asking all my conservative compatriots to do the same. What has led me to this radically "moderate" position? Nothing more or less than my deeply conservative ideals:

1. Although I believe Ron Paul is officially right about 97.8% of the time, and I support his libertarian fidelity to the US Constitution wholeheartedly, I don't believe he has the leadership skills to build a meaningful consensus for his ideas that would allow him to govern effectively and move national policy forward in a more conservative way. In fact, I can see a potential reversal of fortunes in 4 years if he were somehow elected. See my earlier blog post on this topic to learn more. Further, it's clear at this point that Paul has no chance of winning the nod. It's time to unite against Obama and the Democrats around the winner, as a matter of practical political strategy.

2. The most damaging influences on the current and future economy and our libertarian way of life in the US are the crushing debt, overreaching regulation, and out of control spending in Washington--especially on entitlements. The Federal Government has become too large and too unaccountable to manage. There is little political will on Capitol Hill to rein it in; yet if we fail to do so, our way of life will certainly come to an end.

Mitt Romney has consistently demonstrated a passionate commitment to individual and states rights and responsibility--and to using the FREE MARKET to solve economic and social problems, not by confiscating the wealth of the people through a top-down, dictatorial Federal bureaucracy. Mitt will facilitate economic growth by creating a regulatory environment that empowers individuals and businesses to pursue their self-interest to the benefit of all. That's conservative.

3. Mitt Romney is a proven LEADER and problem solver. He has been able, like perhaps no other recent politician in America, to reform and repair failing institutions and policies in both business and government, by reaching across ideological boundaries and building coalitions to achieve the right ends with integrity, transparency, and win/win solutions based on conservative principles.

He has also proven he can make tough, sometimes unpopular decisions in order to achieve the right result for the largest number of people. He has successfully repaired broken businesses and returned them to profitability and growth, has turned a state deficit into a surplus, turned a bankrupt and scandal-ridden Olympics into a proud and profitable international triumph on the heels of the 911 downturn, and created over 100,000 jobs directly; possibly millions indirectly. And yes, he devised a market driven healthcare reform solution for MA that empowered consumers, created more choice, not less, did NOT raise taxes, and placed RESPONSIBILITY for care on those receiving care. Though I'm not fond of the mandate, I understand it, as did the Heritage Foundation, Rick Santorum, and Newt Gingrich, among countless others at the time. This solution had broad bi-partisan support and despite numerous recent changes that Mitt would NOT have supported, is still very popular with the majority of the people in liberal Massachusetts. Mitt also used the VETO pen over 800 times in his state, to keep his heavily Democratic legislature in check.

4. Mitt Romney is a man of intelligence, reason, and sound character with a strong spiritual core. He's a person in whom we, the people, can have confidence. Were he the person of vacillating values and principles that his political adversaries portray, he could never have achieved what he has in his personal, business, and political lives. As one who shares his "peculiar" religious faith and who has worked closely with several ecclesiastical leaders therein, I know something of the depth of his commitment to Christian service; the personal care and concern he's undoubtedly shown to families in financial crisis, divorce, crises of faith, health challenges, death, and probably out-of-wedlock pregnancies and adoptions. Anything but aloof and impersonal, Mitt Romney is invariably described by those close to him as a deeply caring, cheerful, supportive, and helpful person--both empathetic and strong--both anchor and rudder. He has shown a lifetime of fidelity to faith, family, and country that projects a solid core of values upon which this nation can rely.

5. Mitt can win. I am a pragmatic conservative. While his competitors like to remind us that Mitt has failed to gain majority support among GOP Primary voters, they conveniently "forget" that their respective failures to do so are far more extreme. (See Election By the Numbers here.) They "blame" Mitt's organization and finances for his success, but aren't those the very virtues we'll need to beat Obama? And don't we want a candidate who has proven he can organize a winning campaign--or a winning SOMETHING--before we thrust him into the Oval Office? Mitt runs neck 'n neck with the President in poll after poll, sometimes edging him out and sometimes falling a point or two short, but almost always at least within the margin of error; and that's without ANY campaigning directly against Obama, and under constant bashing from the right and the left. Virtually "everyone" sees Mitt as the most electable GOP candidate, and were he to win the nomination, he'd make Obama look like an ignorant, inexperienced, petulant child.

6. Mitt proclaims a message of genuine hope and confidence in the American spirit, libertarian philosophy, and our "rugged individualist" way of life. He speaks of restoring this nation to her former greatness--not through any "BIG IDEAS" of governance, but by returning the power and responsibility for the future legacy of America to We the People, on the proven Constitutional principles that made us who we are. That IS the essence of America and the experiment in liberty that we represent. It's also pure conservatism.

Dubbed "Obama Light" by his political foes, I endorse Mitt Romney for President in 2012. But the monicker is a misnomer. Mitt's record is as stark a contrast to Barack Obama's as anyone in the field with the possible exception of Ron Paul. That makes him far more electable; and that's as rational as it gets.
Posted by Unknown at 1:13 PM