Newt's Chagrin: Who Gets Goosed when Gingrich Goes? 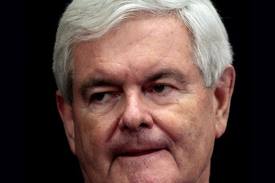 When Newt Gingrich finally realizes his goose is cooked, somebody's campaign is gonna get goosed as his goslings run for a new butterball. Contrary to popular opinion, I'm thinking Romney, more than Santorum, gets the juice. Hear me out: Mitt's strength is with urban and suburban, well-educated, working adults. So is Gingrich's, from what I can see.

Conventional wisdom maintains that Santorum and Gingrich are splitting the "real" conservative vote. Glenn Beck argued just today, that if Gingrich hadn't been in the race in Ohio, Santorum would have taken Gingrich's 8 or 9 percent and would have won the state. I disagree. I believe that vote would likely have been pretty evenly split or even favored Romney.

Here's why: Santorum is capturing the lion's share of evangelical and blue collar conservatives, which includes a substantial chunk of Tea Party affiliates--and some of the old "Reagan Democrats." Gingrich may not want to admit it, but he and Romney share the more affluent, higher-educated, perhaps less socially conservative Republicans. How many Bible Belt conservatives that you know are thrilled about Newt's womanizing and politically opportunistic past.

Romney scores higher than Santorum on fixing the economy. And Newt has fingered the economy as the number one issue. Therefore, more of Gingrich's support ends up in the Romney camp, much to Newt's chagrin. Ironic, I know.

Of course, there is one caveat to this. Gingrich is friendlier towards Santorum and has so soured the milk for Mitt with his Romney-wrath, that his supporters might not stomach a move back to the "Massachusetts Moderate."  Given, however, that they are more affluent, educated, and possibly more independent in their thinking, everyone might just be in for a big surprise. Except me, of course. Now, THAT's RATIONAL! 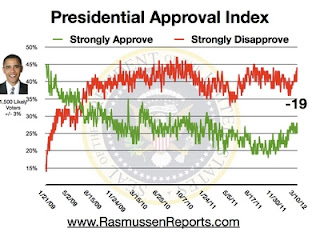 Rasmussen's most recent polling shows that even without Gingrich in the race, Santorum would not be beating Romney. And fully 80% of GOP likely voters believe Romney will be the party's nominee. A majority also see the former MA governor as the most electable candidate by a wide margin over the former Senator from PA. The poll shows that if the contest were held today, Romney would beat Obama by a margin of about 5 points--very close to the spread by which Obama licked McCain in 2008.

It's time for Santorum and Gingrich to show the class, grace, and unselfishness that Mitt showed to McCain last time around: Exit the race and back the party's nominee, Mitt Romney, in mounting an aggressive campaign to take down the Obaminator in November. It's the right thing to do. It's the necessary thing to do in order to insure a GOP victory. Read more on the Tracking Poll and view a video on Romney's rising poll numbers here: http://www.rasmussenreports.com/public_content/politics/obama_administration/daily_presidential_tracking_poll.
Posted by Unknown at 10:05 AM